skip to main | skip to sidebar

As yet another stint of long and difficult work hours in R'lyeh is coming to an end, I contemplate the activities to come this weekend when I travel back to the still damp and chilly northeast and final resting place of the greatest weird fiction author the cosmos has ever known. Since I am for a while at least still a servant of the empire and cannot pursue my true calling as a drug-addled fame hog and kick off my Bloviating Shoggoth of Truth Elder Signs Are Not An Option Tour I am forced to think of more temporary and important things.

"How about a little Heisman, motherfucker?!"
At first I decided to get all up in arms and write my kids' school a nasty letter telling them they had better not even think of pulling a "Seattle's Best Spring Spheres" or I would personally and violently find whatever misguided fellow non-believer suggested the name and shove that person's overly-sensitive head even farther up his/her ass. Oh wait, you didn't? Then forget everything I just said. We know the Easter Bunny poses no religious threat. Show me drawings of da' Ether Bunny weeping at the base of the cross, trying to shove jelly beans through the cracks into the tomb (saying "You'll need the blood sugar when you wake up!") or standing among the apostles pushing chocolate eggs through stigmata in awe-stricken awe and I'll re-evaluate.

That being said, I still have the mythological aspects of the weekend to deal with, which started last weekend (Palm Sunday or, "The day we all wave sticks at Jesus" as my youngest daughter explained) when I had to go to church (well, it's sort of a church - they're Anglican, you know ... "whatever your trip is" seems to be cool with them, very much unlike my Cat-Lick upbringing) to listen to my children sing. It's part of the "unspoken bargain" I feel I have with them that as long as my children are receiving excellent vocal training from them I should at least show up when they are singing so I can

a.) hear their voices
b.) know what to tell them to help them pick their way through dogmatic guidance and find their own way in the world
c.) feel like less of a hypocrite
d.) make sure my eldest (at 11 he sings a beautiful soprano) remains on track to be the next King Diamond

That and the family dinner should be enough of the "traditional" imagery and celebration for yours truly and his minions. While there is bound to be Sphere Hunt at mom and dad's (which will lead to the inevitable hip checks, high-basketing and "She found more than me so she's getting all the dollars!") the Chef's family will revert to a more heathen demonstration of Easter Pride that is worthy of Great Cthulhu...

Mutilation
It will taste and smell much better than four-day-old boiled eggs. Plus, we will ensure a large portion of our craft is pleasing to the Great Old Ones.

from cheezburger.com
Free with every kids' meal, while supplies last!
Posted by Chef Cthulhu at 11:14 PM 5 comments:

Is how the patroller described the conditions on this, the penultimate day of the season at Whitetail. After today, I'm gearing up for the mid-Atlantic surf season.

- Posted using BlogPress from my iPhone 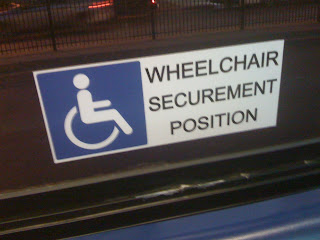 That's today's word. At first I thought they were making the shit up. But I looked it up. It's a word.

I guess "SECURE WHEELCHAIR HERE" is too ambiguous.
Posted by Chef Cthulhu at 10:52 PM 1 comment:

Okay, so I hafta’ admit.  I’m becoming a big fan of the zombies.  I’m not talking about the old band from the 60’s though it is the time of the season for loving … loving zombies.

At first I tried to resist, I really did.  The only real thing I did was write a mildly zombie-esque piece for one of Splotchy’s story viruses some time ago and leave it at that.  Then, a little more than a year ago, the then-president of one of the Armed Services’ senior war colleges recommended Max Brooks’ World War Z to the student body.  “I know it sounds crazy” he said, “but this book deals with a lot of the things that we are struggling to come to grips with in shaping national and military strategies for the future”.
So I picked up the book and started reading it.  Unfortunately, my studies soon overwhelmed me and reading for leisure soon took a back seat to reading for a master’s degree. I could see, however, from the first several chapters that this is a zombie book that is about anything but zombies.  I only just recently finished it, and it’s truly an incredible book.  The thing it really looks at is how might the current mechanisms, habits and trappings of a modern globalized society – governments, post-industrial economies, militaries, transnational crime and black markets, different cultures – easily aid and abet the spread of, fail to recognize, and ultimately face harsh choices in dealing with a truly global extinction-type threat that cannot be mitigated, but only destroyed.  It is told in an “oral history” format from the point of view of the man who wrote the U.N.  Commission report on the Zombie War ten years after it “ended”.  I could write for hours on this book, but I won’t. I will only say READ THIS BOOK.  You will not regret it.  It is pop culture horror that makes you think long and hard.
Two things that got me off my ass to start reading it again. First, I wanted to start reading more fiction; while I love reading history, especially military history, non-fiction was starting to drag.  I needed to start adding some quick-reading and more entertaining stuff to my life. The second thing I did was to watch “The Walking Dead”. I was bored and alone in my room on the Sunday night of the season finale, so I tuned in and watched from start to finish.  Another good product that attempts to look at, on an individual and societal level, what could happen when faced with an un-stoppable, un-curable, non-negotiable bid for extinction. Unlike a book, on film you need to see the horror and the action in dealing with it. While there was enough brain-blowing creamy goodness to go around, there could have been more. Still, I’m waiting for Season Two; it is officially the only television series I am following.
Like Beach Bum mentioned previously, I have had some zombie dreams, one in which I actually stopped the zombies and explained to them that they weren’t acting like zombies (they weren’t responding to sound, they were hiding and setting ambushes and other things that require functioning intellects). During my recent trip to San Francisco I got to the airport very early, more than 90 minutes before my 7:40 am flight boarded.  As I sat at my gate at the end of the terminal in the early morning I saw the first big push of humanity shambling toward me in that early morning fog – all walking in the same gate, mechanically, slowly, glassy-eyed and holding coffees and laptop cases.  All I could think was “Here come the living dead. A sturdy M-4 and a clip or two and I’d have them all down with headshots before they came within 20 yard of me”.

In the world of science, zombies now live among us, terrorizing the insect world. We have discovered that zombie ants, their brains under control of fungi, are in the Amazon and zombie-creating fungi are potentially in rainforests all over the globe waiting to eat the brains of unsuspecting insects. Or maybe evil flies hell-bent upon zombifying them will let their larvae eat their brains.
Hell, serious authors on serious blogs like Daniel Drezner on Foreign Policy have even written about zombies:
Theory of International Politics and Zombies
Night of the Living Wonks
Note that academic papers have been written about the damned things – specifically stating that rapidly and aggressively dealing with zombie populations is the only way to avoid extinction.  If you don’t read the body, at least read the introduction and the discussion at the end.

"Clearly, this is an unlikely scenario if taken literally, but possible real-life applications may include allegiance to political parties, or diseases with a dormant infection."
Classic. The neo-conservative ultra-right-wing Christian tea-partier is just a modern political zombie.  It’s pretty freaking clear that their brain has been either destroyed or replaced with something – a fungus, a larva, what have you – that makes them mindlessly intent on devouring whatever is left of this country’s humanity.
Posted by Chef Cthulhu at 11:49 PM 4 comments:

That's a good word to describe how I feel about this right now.  I could actually not care a lot less about making my post for today, given what has gone one.  Yet, I obviously am taking the time to make a post.  So maybe apathy isn't quite the right word.  Or maybe it's not apathy towards posting as much as it is towards putting down anything even remotely meaningful.

A flu-like bug has its grips on me and even though I have some ideas that I'd love to expound upon I just don't have the motivation.

Youngest daughter tripped and nearly lost two teeth this afternoon, requiring an emergency trip to the dentist and oral surgeon to have them set back in place in hopes that she doesn't lose them. So that takes some mental energy out of you, or at least gives you an excuse to be mentally lazy and say "I got nuthin".

Still, I enjoy switching on the blog-o-sphere every day and reading what everyone writes down.  What that has to do with me being fucking lazy, I have no idea.

...as Randal foresaw, I had this post planned since I posted the last time.

The Proprietor and Cook

What The Cook Is Saying...

Customers with their own booths...

Overheard at the counter...

Outer Gods and Great Old Ones

Proud Recipient of the...

Inflated Visitor Numbers To Make Me Feel Good About Myself